Brexit - Progressives must fight on

Today (30.01.20) Acting Leader of the Liberal Democrats Ed Davey will make a keynote speech addressing party members and activists in Manchester ahead of the UK's exit from the EU.

Ed Davey will make a rallying call to pro-Europeans ahead of our departure from the EU, calling on them to continue to campaign for close association with our allies in the EU and for the progressive values we share. Ed will call for the end of the Remain/Leave division in our country and for progressives to unite to tackle other serious divisions. Ed will declare that the battle against the inequality of wealth and power is an area in which voters from across the Brexit divide can work together.

Ed Davey is expected to say 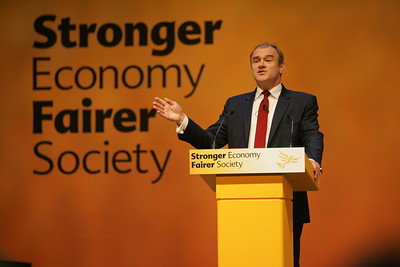 “Tomorrow will be a celebration for some. But for others it will be a dark day.

“For the millions of us who marched against Brexit and the millions who voted to stay, tomorrow will be desperately hard.

“We built the largest pro-European movement this country has ever seen. And though ultimately we did not succeed in stopping Brexit, I am immensely proud of all that we have achieved."

How Liberal Democrats will continue to fight

“The Liberal Democrats will always be a proud pro-European, internationalist party. We will never stop fighting for Britain to have the closest possible relationship with our European friends.

“Liberal Democrats will work with anyone within our United Kingdom, who share our values, to re-unite our country."

Divisions in the country

“We must no longer be a country that is divided by leave and remain, but that means we must heal our country’s other divides too.

“And the forces of English and Scottish nationalism unleashed by these divisions, cannot bring our fractured country together: by their very nature they seek to divide our United Kingdom further.

“Only progressive parties like the Liberal Democrats will fight to disperse power and wealth across our country, and to create opportunity for every child and every community."

“To the many people who voted to leave the EU out of frustration.

“Because opportunity has not been fairly shared.

“Because too much wealth has stayed in the hands of the always wealthy.

“Because too much power had stayed in the hands of the already powerful.

“They have. We agree with you. We share your frustration - and your impatience for change.

“From the deep reform of Britain’s democracy and power, to our radical vision of a fairer, greener economy, Liberal Democrats offer real change that can truly unite our country.”